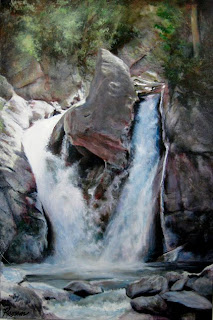 I finished my first painting in almost 2 months.  "Bash Bish Falls"  48" x 32" oil on canvas.  I had no desire to finish this one when I initially started it (March) because I couldn't find a reason for it.  My mind wasn't into it.  I stayed away from the studio for this entire time and occupied myself with new media and materials - like welding - (pictures might follow of these explorations).  I wanted to do more than a "landscape".

It seemed like I had given up on it, or at least I had lost interest in following through on this idea - I was starting to consider what I might paint over it.  All I had was a loose drawing on the canvas from when I visited and a slight indication of some rocks.  I wasn't sure I could pull off the composition I wanted.

I was out for a walk last weekend and went to see a gallery show, I was overcome with a bit of a "creative rage" and knew I had to make something of this image- or at the very least make a horrific mess -  and break through this creative block.  There really was no choice.  It was my duty.  I left and went directly to the studio.  I completed 90% in a two day furry.  I think it is the legend of these waters that propelled me through.  I see her legs.

Bash Bish Falls is a waterfall in the SouthWestern corner of Massachusetts.  The story states that a native woman (a Mohican Indian named Bash Bish) who lived here was sent to her death over the falls for adultery.

I find the surging water powerful - especially in the Spring when their is so much volume. The last time I was here was in 1999 and I did a small sketch in roughly the same place.  I think I've come a long way since then.  I know I understand quite a bit more now.
Posted by Michael Rousseau at 11:51 PM No comments: