just be patient a little longer..... 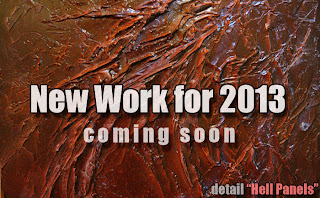 I've been busy making some new work. I have a reoccurring voice in my head saying "just make it". Too often I will visualize a piece and never move on it.  It is kind of like my internal "critic" looks at the mental image to determine if it is worth the time and effort (and money sometimes) to make it. This can be very frustrating to look back on.  I mean, why not just do it and look at it in the flesh and determine the next step?  The mental image is not the one that is always produced.

Ideas come during the creation.
and they continue to come after you make it and sit and think about what you did and what you can do to it.  As you work you realize possibilities.

Sometimes ideas reach years back.  Sometimes they are fresh and brand new. - and sometimes they are a combination of the two. Sometimes I do not know how to reconcile an idea and it will be put on hold. (I'm talking about the new pieces now)  The texture panels from the previous post have been acted upon and I am following through on my desire to see what is there.  I have 4 more large (2'x4') panels in the works and 2 very large (4'x4') ones on deck.

I got really interested in the visual image of lava flows and was exploring that in the textures and blasting them with a rich red when a phrase crept into mind - "Hell Panels".    well, that was enough to get me excited.  and to keep exploring techniques.  I'm glad I make a bunch of panels (small ones too) because I've got a lot of ideas/applications to test. The "theme" I've had as guidance is the elements - earth, air, fire, water - kind of thing.

a little peek?  ok..
same image- I shot it one way, then flipped it and shot it again.  look how ENORMOUSLY different they appear. (I also add transparent pearlescent colors - the blue/violet) the transparent only shows up when you look at it in a certain way.  how cool is that?  and this one is still in progress - it is a test subject. 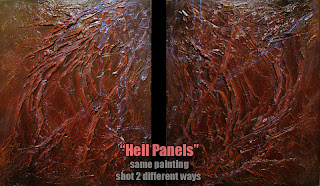 Posted by Michael Rousseau at 10:43 PM No comments: